The Women of the Serenissima: destinies, stories, culture | Wednesday, June 7 at 7pm

The Women of the Serenissima: destinies, stories, culture
With the participation of Barbara Marengo

Part of the series “(No longer) Anonymous women. A confrontation on femicide”

On Wednesday, 7th June, AlbumArte will host a meeting to tell the story of three extraordinary women of the ancient Republic of Venice, as part of the programme “(No longer) Anonymous women. A confrontation on femicide”. During this session of the series, the focus will be on past events, as physical and psychological violence on women started long ago.

What is the significance of telling today the stories of three women who lived in a predominantly masculine society in the XV, XVII and XVIII centuries, in a republic where men managed state affairs and commerce? During more than 1000 years of Duchy’s history in the Serenissima Repubblica (known also as Most Serene Republic of Venice), men were not the only ones who dominated political, scientific and diplomatic matters that made Venice powerful and respected across the world.

Caterina Cornaro, Lucrezia Corner Piscopia and Cecilia Venier are three examples of women, far away in time but close in spirit, who asserted their own will by being courageous and adventurous, sacrificing themselves while at the same time displaying qualities previously unexpected of women.

They are only three of thousands of examples of young girls who, with their willingness for redemption, contributed to build a long series of steps that represent awareness, emancipation and women’s rights. Nowadays women are still facing many problems and discrimination characterizes so many lives. Despite hundreds of years, the story of these women is not far removed from our present time.

Therefore there is even more need for reflection.
Women making history, the history of women. 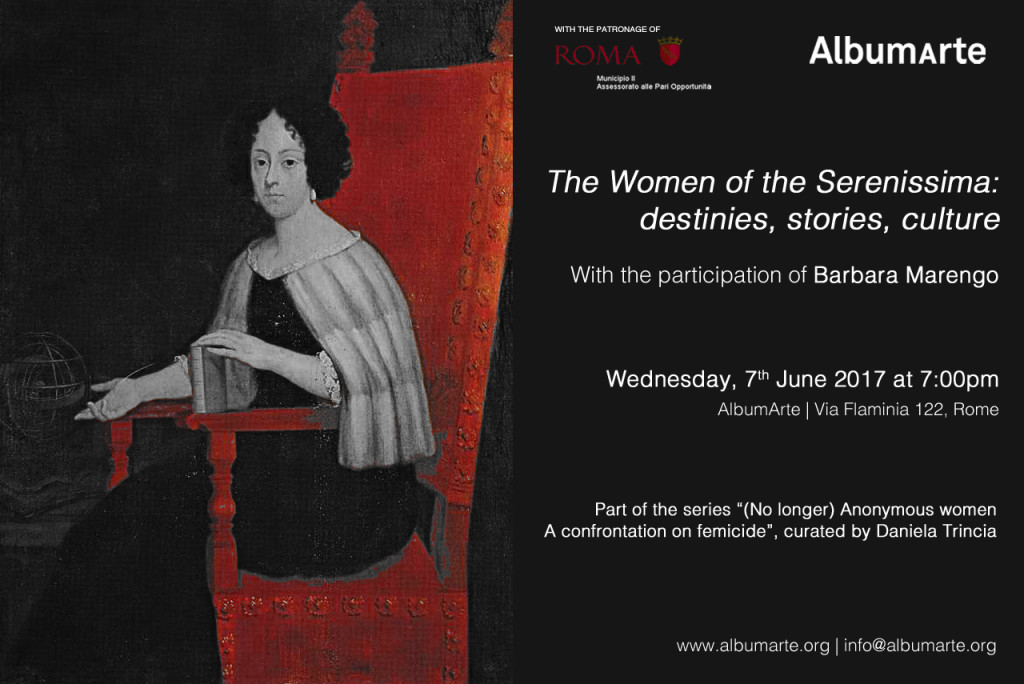 Barbara Marengo | Venetian, journalist, graduated in Political Science at the University of Padua, she studies the history of Venice and of the Mediterranean. The investigation on the ancient relationships between the shores of Mare Nostrum, especially at this difficult time, represents a way to bring together forgotten common histories and stories. Her stay in Albania, Greece, Turkey, Tunisia, Morocco became the starting point for a journey through a history made of both known and less known people and events.

The whole project “(No longer) Anonymous women. A confrontation on femicide” was developed with the patronage of Assessorato alle Pari Opportunità – Municipio II of Roma Capitale.